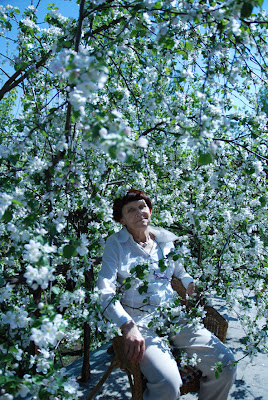 Dear friend,
I would like to share with you all my miracles. Some of them are funny and pleasant some of them are sad and even anxious, and all of them are mysterious. I believe that miracles happen every day. They really do.
Old apple trees are growing around my house. Their branches pop in our windows and hang over our balcony.
It's wonderful to live together with apple trees and look how they are changed everyday. One month ago they were wearing snow-white fluffy dresses, later they got soft green dress with small apple buttons. Yesterday the apple buttons were green and today they got red and crimson glows. Very soon they are going to be sweat and juicy apples. And fairytales will be hidden in every single apple.

Once there was a princess named Pomella who was very different from all other princesses.  Every day from morn until eve she toiled away in an orchard near the palace – her very own apple kingdom.  Every autumn at her command heaped baskets full of the ripe fruit were carried through the gates and shared far and wide throughout the lands of her father the king.  But the king was not happy.
“Should a king’s daughter be working in an orchard?” he asked.
“But, Daddy,” she replied, “my dream is to grow a new kind of apple tree.  One that isn’t afraid of the freezing cold or a summer without rain.”
“Ugh,” said the king, a frown on his face “Why are you filling your pretty head with such horrible things?  Much nicer to dream about sweets from the palace table.” 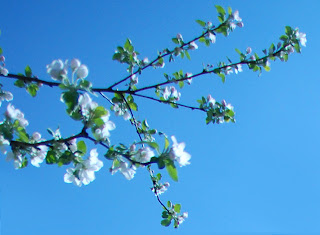 Everyone knew the king loved to eat.  Every day there was a sumptuous feast.  The enormous cakes, pies and candied dishes rolled out of the palace kitchen barely fit on the tables.  The king and his guests would eat so much that their stomachs hurt, and most days they had a hard time getting to sleep.  But the next day that was all forgotten, and the cooks were ordered to prepare another mountain of delicious sweets.
The king grew fatter and fatter, his middle bulging out like a barrel.  It took four servants to lift him out of bed in the morning.  Doctors were summoned from all over the kingdom to examine the royal patient.  Fat, they said, nodding to each other wisely, fat in the heart and liver. They prescribed the strongest medicines they could think of, but the medicines only made the king itch.  Meanwhile the queen’s blood pressure was rising, and one after another the ministers took to their beds.  All of them were suffering from a lack of vitamins, for it had been years since anyone at court had eaten fruit or vegetables.
Soon there was no one left to run the kingdom, and the young princess put her foot down.

Story of a young Amerasian girl. ( by Rick Smolan, photographer)

I am inspired by people who do not pass by the people who need help. They start projects that affect the minds and hearts of people. And bring this project to the end. Deeds, not words adorn the human. Let's learn to do the projects! And our lives are filled with meaning :)
Posted by Unknown at 2:37 AM No comments:

The new book "The Adventure of a Water Droplet Pally"

A new concept in paper quilling is a children's book with quilling artwork illustrations!

Quilling, also known as paper filigree, it has been around since the Renaissance age, but I was only recently introduced to it by my friend. This art of cutting and curling narrow strips of paper and laying them on edge to form intricate filigree designs sparked my interest and I found it fun and pretty relaxing.


When Karina, the young artist, suggested making artwork illustration in paper quilling for our ecological fairytale about water drop, I was happy. But I cannot even imagine what a talented artist can do with just a few colorful strips of paper.

To see the fairytale with quilling artwork illustrations one feels like a MIRACLE! 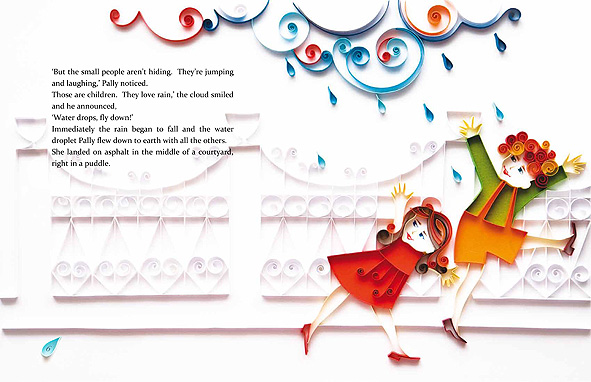 I’m a fairy taller and the author of the numerous children's books but I haven’t seen the illustrations for the children books as impressive as quilling artwork illustrations made by Karina. They are really magic, fairy and brilliantly introduce the conception of the book. 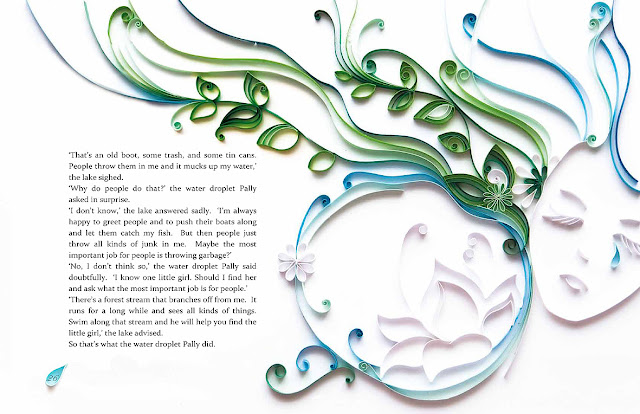 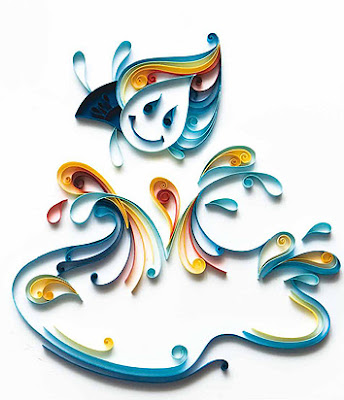 I want to share with you one idea. Last year we thought that we should make personal photo books for orphans. But we could made only one book for one child - Sasha Ismailov, I wrote about him below. But I think it's a great idea! It's amazing present for child! not only for the orphans but for any child. We want to describe different parts of life of the child, may be use old photos from his childhood (if child has them), also include there photographes made by me and things this child is interested in.
You can see below a few pages from the photobook we made for Sasha. We put there his fairy tales (wrote on lessons of the Fairy tale therapy with Alexandra), Sasha's song ( we ask our friend wrote music for Sasha's poem), also we wrote inspiring  words especially for him.

This book size - 20 sm x 20 sm, 38 pages. Name - "The beginning of a long journey".
Only problem is money. Such personal photo book is not chip. But we're looking for the donations and we plan to make such photo books for orphans in future.
P.S.  Sasha Ismailov lives in Republic of Adugea (Russia) and this photo book are also there ))

A few words about the art exhibition in our town. 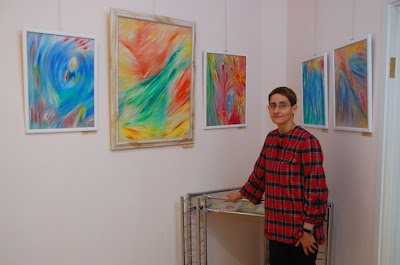 I wrote below that 2 Masha's paintings were bought there. And now, about exhibition! "The world through the eyes of countryman". People from our region show their paintings and other artworks.


Organizers of the exhibition took 5 of Masha's artworks.


Also there were some of Masha and Alesia' books.
Masha is always happy to show her artworks. And it's so nice that people like them.

Posted by Unknown at 7:28 AM No comments:

Two paintings were bought at the exhibition )

We were so glad! One lady opens new ecological center for kids and bought two paintings with trees and flowers for it.      It's great! Paintings will take their place and will please people.

Posted by Unknown at 7:04 AM No comments:

Not so long ago Masha and Alesia have got a proposal became a TV heroes :-)) It was so fast and unexpectedly that we do not have time to wind up! Our city held a competition between broadcasters from  Moscow Region. All participants should made a short video clip in a few hours. It was named "From the wheels". And one camera crew chose storytellers from town Vidnoe ( Maria and Alexandra).
This video contains a lot of video clips, and video clip about us begins from 10:20 min. It's in russian, of course.

The World of Fruits

How to teach children to love fruits

The World of Vegetables

How to teach children to love and eat vegetables!

Here you can buy kind books

The healing power of tea and herbs

Stories about tea and herbs

Links with our projects Story about Froggy Fro and the Pumpkin ;-)

"The World of Fruits" How to teach children be success and creative!

How to teach kids to love Nature